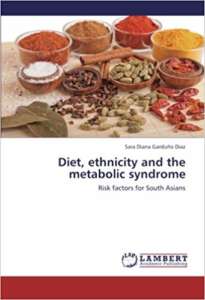 he South Asian population in the United Kingdom has been reported to be at high risk of developing cardiovascular diseases and type 2 diabetes. These two chronic diseases are the end result of a condition known as the metabolic syndrome. Although metabolic syndrome and its association to dietary patterns has been reported in various studies, most research has focused on Western countries and ethnic minority populations have been overlooked to a great extent. Using detailed dietary information the objective of this work was to describe the dietary patterns of South Asians and to investigate their association with metabolic syndrome risk factors. Further, the study aimed to recognize lifestyle risk factors associated to ethnicity including religion, acculturation, education level and income. Although results were in accordance with the existing literature in terms of diet composition, the examination of additional risk factors demonstrates the importance of developing public health prevention strategies tailored to the different minority ethnic groups in the UK’s heterogeneous population. 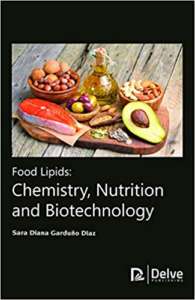 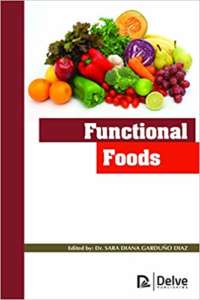 Clearly, all foods are functional, as they provide some degree of flavour, scent, or nutrient value. Within the last years, however, the term functional as it applies to food has adopted a different implication: that of providing an additional physiological benefit beyond that of meeting basic nutritional needs of energy, vitamins or minerals. Enter functional foods. As consumers worldwide become more health conscious, the demand for health-promoting foods and food components is expected to grow. The market for such foods is predicted to be quite large. Before the full market potential can be realized, however, consumers will need to be assured of the safety and efficacy of functional foods. Current and future scientific studies are expected to provide this assurance and to inspire confidence in functional foods in the minds of consumers worldwide. As the products of scientific innovation and industrial processing, functionally enhanced foods promise healthfulness but conflict with understanding held by many consumers that healthy foods are those that are the most “natural.”This book explores these conflicting ideas: that of developing new food products, and that of keeping them familiar enough to ensure acceptance and consumption. The book covers definition of key concepts, such as nutraceuticals and bioavailability. It explores the different types of functional foods, both naturally occurring and “designer foods.” Sections on key chemical components are included, as are discussions on how these compounds interact as part of different foods. Finally, sections on what functional foods represent for the consumer, health and safety issues, as well as legislation and potential risks with functional foods are covered. Several challenges exist for the vitality of the functional foods market in the years ahead. First, there are a number of scientific challenges for those attempting to unlock the food/health “equation.” How do these food components act to modify disease processes and for whom are these benefits most pronounced? The food/health equation includes a complex set of interactions that must be better understood so that new food product efficacy can be appropriately characterized. The factors contributing to disparities in individual health responses to foods need to be clarified. These include genetic variation, gender differences, individual differences in metabolism, and how bioactive phytochemicals alter the routine functions of traditional nutrients.This is a book of exploration, designed for undergraduate and graduate students with a basic understanding of sciences. With a well-rounded approach, it aims to raise points for consideration and discussion, and to challenge both supporters and antagonists of the role of functional food in health.

Probiotics and Prebiotics in Food, Nutrition and Health (November 2017) 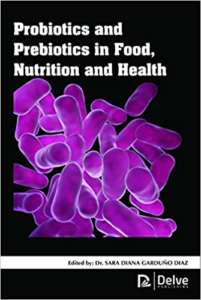 approximately 2000 BC, some form of medicine has been practiced for the treatment of maladies. Beginign with the use of roots, then progressing to using prayer and potions, and, ultimately, in the 1940s, to the discovery and use of pharmaceuticals, particularly antibiotics, the use of external concoctions to aid the body in regaing and maintaining a state of health has been persued by both the lay man and the health professional. Currently, it has become apparent that most medication and alleopathic forms of medicine, although curative for many conditions, are not without risk and may have many adverse effects. This is particularly evident with the use of antibiotics, which are leading to the creation of resistant strains of bacteria that are often more deadly than those originally being treated. To counteract these effects of antibiotics, scientists have returned to natural substances, such as probiotics.Probiotics, probiotic research and probiotic foods are fast growing topics. Probiotics are living microorganisms that, when consumed, have the potential to confer a beneficial health effect. Most scientists today will agree that the microbiome plays an important physiological role for the host when it comes to bacterial interaction. Thus, dietry modifications to manipulate said interaction are being explored. In principle, there are two major strategies for influencing the microbiota: one is the use of living bacteria added to the food, which must survive the gastrointestinal tract to be active in the colon (probiotics). The second strategy is the use of dietary ingredients that are nondigestible, reach the colon, and can be used by health-promoting colonic bacteria (prebiotics). Most people today suffer from some form of diet-related health condition, including obesity, cancer, hypersensitivity, vascular diseases and degenerative ailments. The use of prebiotics as a functional food component in the diet seems to be an attractive alternative to improve the quality of life from the previously mentioned health conditions. This possibility is being explored by several clinical trails, the food industry, and large scale research project such as the Human Microbiome Project. All of these efforts are expected to revolutionize the prebiotic and probiotic world by developing specific functional properties. Health claims related to pre and probiotics include the prevention of weight gain in adolescents and improving immunity in geriatrics and infants. These functional foods are also expected to enter the dermatological sector and boost skin health, perhaps not in their food form but encapsulated. Prebiotics are also likelt to replace the antibiotics used as growth stimulants in apiary, fishery, poultry and animal husbandry. The clinical significance of both pre and probiotics remains to be clarified, the claims of efficacy proved and underlying mechanism decoded. Owing to its wide range of preventative and therapeutic possibilities prebiotic and probiotic research is certainly catching momentum.